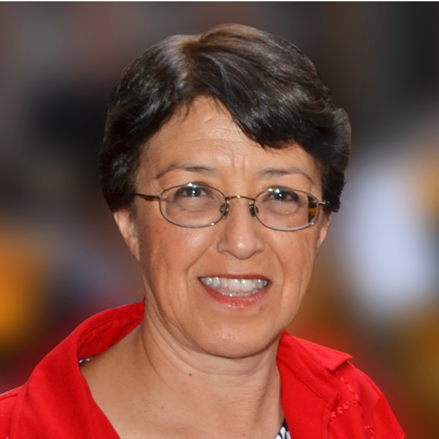 Gloria Estela La Riva is a labor, community and anti-war activist based in San Francisco, California. Born in Albuquerque, N.M., Gloria attended Brandeis University where she was active in affirmative action struggles.

Gloria has been a registered member of the California Peace and Freedom Party since 1981. In 1994 and 1998, Gloria was the PFP’s candidate for governor of California. She was the 2008 presidential candidate of the Party for Socialism and Liberation. Gloria is the elected Executive Vice President of the Pacific Media Workers Guild, Communications Workers of America.

Her Vice-Presidential running mate in California is Dennis Banks, co-founder of the American Indian Movement.

La Riva is running on a ten-point program:

1. For the earth to live, capitalism must end

2. Make a job or income a Constitutional right

A decent paying job must be a legal, guaranteed right. The minimum wage should be raised to $20 per hour and a living income must be guaranteed for those who cannot work.

4. Shut down all U.S. military bases around the world—bring all the troops, planes & ships home

U.S. foreign policy uses the pretext of national security to enforce the imperialist interests of the biggest banks and corporations. That’s what is behind the endless wars and occupations. Convert the $1 trillion military budget to provide for people’s needs here and around the world. Stop U.S. aid to Israel – self-determination for the Palestinian people. End the blockade of Cuba. Independence for Puerto Rico.

More than 2.2 million people are behind bars in the largest prison complex in the world. Mass incarceration of our youth is the real crime. End the mass incarceration of oppressed communities. Fully prosecute all acts of police brutality and violence. Honor Native treaties.

Support the right of all workers to have a union. Fight back against the attacks on collective bargaining. Repeal the Taft Hartley Act. In the spirit of the Fight for 15 and low-wage worker organizing, rebuild fighting—-and striking-—labor movement.

7. Equality for women and free, safe, legal abortion on demand

Stop the attack on women’s reproductive rights. Women must have the fundamental right to choose & control their own bodies. Women still earn 22 percent less than men, and the gap is even greater for Black and Latina women. Close the wage gap and end the gender division of labor.

8. Full rights for all immigrants

Abolish all anti-immigrant laws. Stop the raids and deportations, end the government’s war on immigrants. Dismantle the border wall.

The banks’ vast wealth came from the people’s labor and taxpayer bailouts. Capitalist banking is a form of organized crime. The billionaire bankers looted and destroyed the economy. It is time to seize their assets and use those resources in the interests of the vast majority. Power must be taken out of the hands of the super rich, and the Wall Street criminals must be held accountable.