This statement originally appeard at glorialariva4president.com on September 25, 2016. 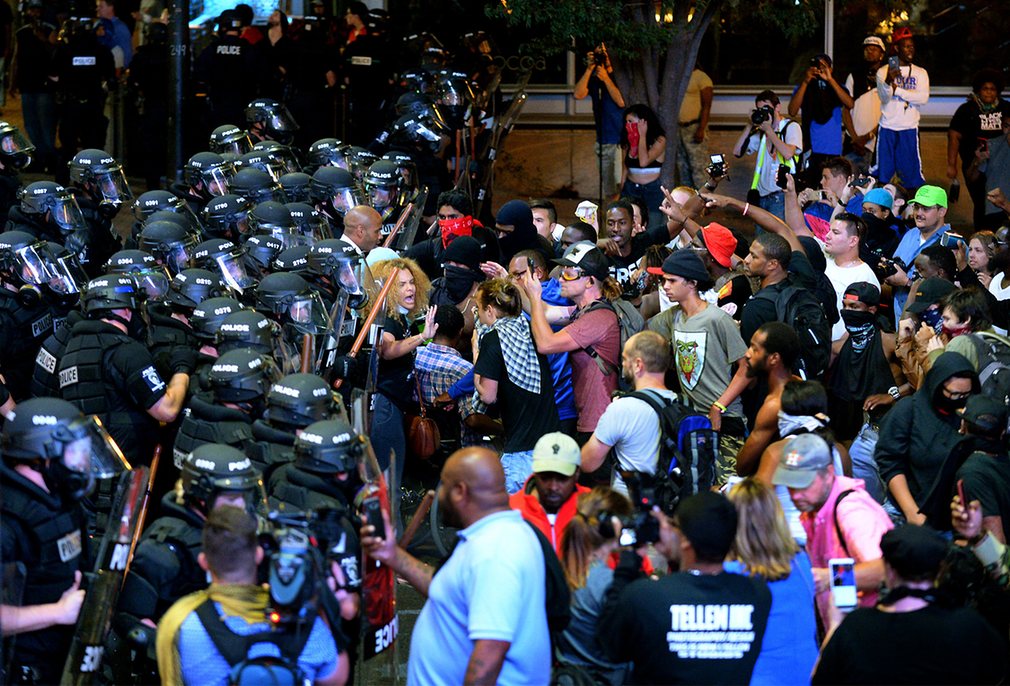 Protests continue to rage in the streets of Charlotte, North Carolina following the police shooting of 43-year-old Keith Lamont Scott. It is just the latest U.S. city to erupt as a consequence of police violence in the two years since the Ferguson Rebellion.

In the three weeks after Colin Kaepernick started his protest, 67 people, 15 of whom were Black, were killed by the cops. That is not even an exceptional rate any more — nationwide the police are killing three people per day.

These ongoing acts of racist police terror in the United States, despite countless protests, prove that Black lives truly don’t matter to the capitalist ruling class. They remain completely loyal to militarized policing and a racist criminal justice system as tools to keep poor and oppressed communities from challenging their system of extreme and enduring inequality.

Republican presidential nominee Donald Trump condemned the Charlotte uprising as for making the United States “look bad before the world.” Black people being gunned down every 28 hours by people ostensibly sworn to serve and protect them. That is what is actually embarrassing and disgraceful. It’s a trend that the whole world is watching.

The blustering billionaire has himself encouraged violence himself Black Lives Matter, immigrant rights and Muslim protesters. Trump spreads the myth that the police are actually victims of unfair criticism and violence, protecting “civilization” from the “chaos” of protesters and dangerous cities. He has been endorsed by police officers associations around the country.

But the truth is that for all the talk of Democratic Party politicians like Clinton, they have done nothing to rein in the epidemic of brutality and violence in the police departments they control. In fact, Charlotte, Baltimore, Ferguson, New York, Cleveland, Chicago, Oakland and so many other cities all have Democratic mayors, who appoint the police chiefs, Black and white, and equip the cops with military weaponry and ballooning budgets. The Democrats control the White House, the Attorney General and the FBI. They are equally responsible as any other party, and all their tired rhetoric about “building community,” “dialogue” and “peaceful resolution” has not delivered even a sliver of real justice. People are rightfully fed up with it.

Clinton notoriously called young Black men “superpredators” in a 1994 statement. She has tried to distance herself from that statement now that her campaign is relying on a big electoral turnout from Black and other communities of color. But it wasn’t just rhetoric; the policies Clinton supported, from mass incarceration to the gutting of welfare to the military-industrial complex and her opposition to universal health care, have had a ruinous effect on Black America.

Black lives will only matter under a new system

Party for Socialism and Liberation presidential candidate Gloria La Riva, by contrast, has been a front-line fighter against racism for decades. In September 2005, six days after Hurricane Katrina, Gloria traveled to New Orleans, producing the video “Heroes Not Looters”. In 2014, she traveled to Ferguson to stand with the uprising there in the wake of the police murder of Michael Brown, sustaining an injury from police rubber bullets. She was in Baton Rouge this summer to join with the community demanding justice for Alton Sterling, and was targeted for arrest.

La Riva declared her solidarity with the people of Charlotte and Tulsa: “The rampant killing of Black people will only cease when the police are no longer allowed to act with impunity. Justice can only be served when communities are no longer under occupation and human lives are considered to be more valuable than the property of the wealthy. This can never happen under capitalism, a system which has always utilized white supremacy to function and gives its officers the right to kill without consequence.”

“Those demanding ‘peace’ from the protesters in the streets have it all backwards. It is the police, not the movement, that is stealing innocent lives, and showing up with assault rifles and in riot gear. Ever since slavery, when Black people and other progressive people have risen up against racism, they have had to face the armed police, the government, vigilantes and legions of false friends who lecture them for resisting in the ‘wrong way.’ But progress has never been made by stopping the struggle. I salute those who are rising up and I stand with them.”

← Gloria La Riva for President office to open in Sacramento
Yes on Marin County Measure A: Strong Start for Kids →