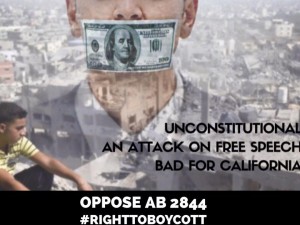 “This legislation against the BDS Movement is a direct attack on free speech and freedom of assembly. It violates the rights of the people of California and justifies the oppression of the Palestinian people by providing cover for Israeli apartheid. Governor Brown must veto Assembly Bill 2844!” said Gloria La Riva, the Peace and Freedom Party presidential candidate on the California ballot.

La Riva was commenting on California AB 2844, a bill that would impose a public-contract ban against any entity that is identified as observing a boycott of Israel. The bill is currently on the desk of Governor Brown awaiting his decision, and it will become law unless he vetoes the bill by the end of September.

“The bill itself is nothing more than a desperate attempt to silence those who are working to end Israel’s illegal occupation, apartheid and human rights violations of the Palestinian people,” continued La Riva. “We support the Coalition to Stop AB 2844, a growing movement of more than 100 civil liberties, human rights, faith-based and community organizations, in its fight against the bill.

“The Boycott, Divestment and Sanctions movement is a non-violent method being used by activists around the world to change the policies of the Israeli government, in the same way the apartheid regime in South Africa was ended. As in South Africa, Israel maintains a system of settler colonialism, apartheid and occupation over the Palestinian people. And this occupation is only possible due to the international support provided by the United States, including the $4 billion per year in U.S. tax dollars sent to Israel.

“It is truly an outrage that the Obama administration has further approved $38 billion in military aid to Israel, the largest foreign aid package in U.S. history.

“Therefore, it is up to the people, through academic institutions, organizations and individually, to stand up for justice when governments refuse to do so.”

La Riva concluded, “Growing numbers of groups have joined boycotts of illegal Israeli settlement products and divested from institutions complicit in the Israeli suppression of the Palestinians.

“It is clear that the BDS movement is having an effect. This is why some U.S. politicians have resorted to repressive measures to suppress the fundamental right of free speech. Our campaign demands self-determination for the Palestinian people, the right of return for Palestinian refugees, and an end of U.S. aid to Israel.”