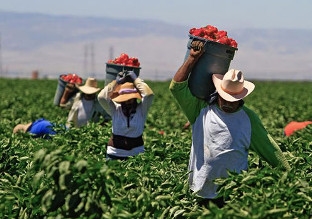 “In Central California the workers suffer from poverty, racism and the water crisis while the rich just get richer,” said Gloria La Riva before her trip to Central California this weekend. La Riva is the Peace and Freedom Party and Party for Socialism and Liberation candidate for President in 2016. She is also the candidate of the Liberty Union Party of Vermont.

Out of the five presidential candidates on the California ballot, she is the only Latina, the only person of color, the only worker and the only socialist.

La Riva continued to say, “The hundreds of thousands of immigrant workers who are the backbone of the massive agricultural industry Central California have faced oppression and state neglect for a long time.

“I particularly denounce the extremely racist and dangerous speech that Trump gave last night in Arizona against Latino immigrants. How dare he threaten the workers who are an integral part of the U.S. working class! We stand 100 percent with the immigrant population.”

La Riva was the founder of the Farmworkers Emergency Relief Committee in 1991, following the disastrous citrus freeze that left over 100,000 farmworkers with no income. The committee provided emergency relief for months to thousands of families in Orange Cove and nearby area. The most important accomplishment of the FERC and La Riva was to mobilize public support and force FEMA to open offices in the region and assist the affected families.

La Riva says, “Recently we led a delegation of activists to learn more about the water crisis in East Porterville, where more than twelve thousand people went without running water for more than half a year. The lion’s share of water in the state is used to generate profit for agribusiness, with no regard for the population that needs water for survival.

“There is a clear pattern in California. Corporations reap mega profits while poor and oppressed people do the work. Corporations pollute and destroy the land leaving it unlivable for the people, and the government turns a blind eye. This pattern is particularly daunting considering that climatologists examining corporate water usage and carbon emissions predict the expansion of a mega drought across the region.

“Our presidential campaign says ‘seize the profits to save the planet.’ Under socialism the people would determine what is really necessary in terms of crops to grow and to properly conserve water, in short, to create a sustainable agriculture.

“Our ten-point program also calls for an immediate end to all deportations and full legal status to all immigrant people, an end to police brutality with the offending cops to be put in jail, and full federal equality for all LGBTQ people.”