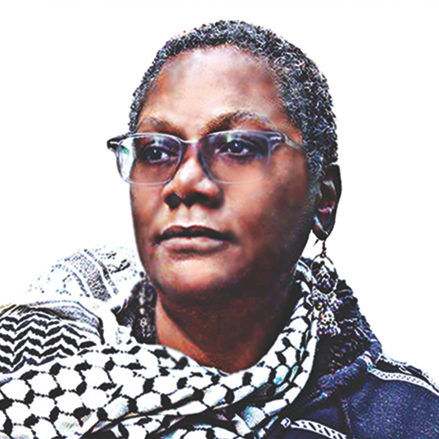 Sisters and Brothers, Comrades in Struggle:

We send warm greetings of solidarity to Peace and Freedom Party members.

The 2016 election year is momentous. We are faced with the racist, reactionary hatred of billionaire Donald Trump and all the Republican candidates who want to take this country back to an earlier stage of imperialism — before the Civil Rights, national liberation and workers’ struggles won major gains and before the women’s and LGBTQ movements.

One presidential candidate, Bernie Sanders, describes himself as a democratic socialist. Who would have thought he would be giving the Democratic Party establishment a run for their money?

In the midst of all this stands the Black Lives Matter movement resisting unbridled police terror. This movement has forced police brutality, mass incarceration and gentrification front and center. This ongoing battle against white supremacy is a tremendous step forward for the working class, poor and oppressed — including the victims of racist state repression, notably by the police and ICE.

The movement for immigrant rights continues, as witnessed in Wisconsin on Feb. 18, when thousands held a Day without Latinos. The fight against environmental racism is strong in Flint, East L.A. and North Carolina. The fight for $15 and a union continues.

Capitalism is a system that must be uprooted if humanity and the planet are to survive however. This is why the Workers World Party campaign pushes for a movement to make fundamental change now and beyond the elections.

Most importantly, the current period calls for a strong stand against white supremacy. This is why we are running two Black candidates, Monica Moorehead for President and Lamont Lilly for Vice President.

Socialists must make the struggle against racism pivotal. The legacy of slavery is still integral to U.S. society, despite the historic election of the first Black president. The Black Lives Matter movement is carrying forth the ongoing struggle for Black Liberation, central to the victory for our entire class.

Tragically, a significant number of people are influenced by messages of racism, division and fear, focused on scapegoating Muslims, Mexicans, Arabs and others. But the root of this racist division emanates from the ruling class, so fearful of a total collapse of their profit-greedy system with capitalism at a dead end. This is why Bernie Sanders’ anti-Wall Street message is resonating.

The Moorehead/Lilly Campaign is reaching out to those who want fundamental change. It is a clarion call to challenge racism and fight for revolutionary socialism. Therefore we are calling for Tamir Rice Brigades at the Republican Party Convention in Cleveland this July. And why we’re mobilizing for the Democratic Party Convention in Philadelphia to demand that fighting police terror is not just campaign rhetoric.

This is a great moment to unite all affected by the deepening economic crisis to build a massive anti-capitalist movement. It’s time for revolutionary socialists and leftists to help advance solidarity with Palestine, the Ayotzinapa 43, Haiti, Syria and oppose all imperialist interventions abroad. Let’s make international solidarity part and parcel of all U.S.-based movements.

We would be honored to represent Peace and Freedom Party on the ballot. California was the home of the Black Panther Party for Self-Defense. It’s where the people’s rage forced the first cop, Johannes Mehserle, to be convicted of killing a Black man, Oscar Grant. In 2006 California’s immigrant rights rebellion inspired the world.

Every crisis of the system is illuminated in our campaign. We offer California two Black revolutionaries who have been tested in our dedication to unity, solidarity and class struggle in the fight to win socialism.