Although Secretary of State Alex Padilla unfairly excluded Dr. Jill Stein from the June 6 presidential primary of the Peace and Freedom Party, she is actively seeking our nomination in California. (See this article for details.) The following statement was provided by the candidate, who is responsible for its content. 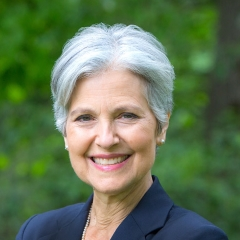 Jill Stein’s Power to the People Plan creates deep system change, moving from the greed and exploitation of corporate capitalism to a human-centered economy that puts people, planet and peace over profit. it empowers the American people to fix our broken political system and make real the promise of democracy.

This plan will end unemployment and poverty; avert climate catastrophe; build a sustainable, just economy; and recognize the dignity and human rights of everyone in our society and our world.

Dr. Jill Stein, the Green Party’s 2012 candidate for President, holds the current record for most votes ever received by a woman candidate for President in the general election. She is a mother, an organizer, and physician. She has helped lead initiatives to fight environmental racism and injustice, to promote healthy communities, to strengthen local green economies and to revitalize democracy. She has helped win victories in campaign finance reform, racially-just redistricting, green jobs, and the cleanup of incinerators, coal plants, and toxic threats.

Her Power to the People’s Plan includes:

Create millions of jobs by transitioning to 100% clean renewable energy by 2030, and investing in public transit, sustainable agriculture, and conservation.

Jobs as a Right:

Guarantee economic human rights, including access to food, water, housing, and utilities, with effective anti-poverty programs to ensure every American a life of dignity.

Health Care as a Right:

Establish an improved “Medicare For All” single-payer public health insurance program to provide everyone with quality health care, at huge savings.

Education as a Right:

Jill Stein has been polling as high at 8% in some national polls. Her website is www.jill2016.com.

Her Vice-Presidential running mate is Ajamu Baraka, an internationally recognized human rights activist, organizer and geo-political analyst. Founding Executive Director of the US Human Rights Network (until 2011) and Coordinator of the U.S. based “Black Left Unity Network’s” Committee on International Affairs, Baraka has served on the boards of various national and international human rights organizations, including Amnesty International (USA) and the National Center for Human Rights Education. He has served on the boards of the Center for Constitutional Rights; Africa Action; Latin American Caribbean Community Center; Diaspora Afrique; and the Mississippi Workers’ Center for Human Rights.

Baraka is a member of the Green Shadow Cabinet and an Associate Fellow at the Institute for Policy Studies (IPS) in Washington, D.C. An editor and contributing columnist for Black Agenda Report, Baraka has appeared on and been covered in a wide-range of print, broadcast, and digital media outlets such as CNN, BBC, the Tavis Smiley Show, ABC’s World News Tonight, the Washington Post, the New York Times, and Telemundo.